Day Of The African Child

Today the world marks the 31st International Day of the African Child. We commemorate the lives of
the gallant students brutally murdered by the Apartheid regime in Soweto, South Africa on this day
46 years ago for demanding an end to education injustice. At their tender ages, they understood
that the apartheid education system was designed to promote race-based differential development
of societies in the country making it the hotbed of the pervasive socio-economic and political
inequities in their society. The young students resolved to do something about it and paid the
ultimate price!

As we mark the 46th anniversary of their watershed heroism, it is important to keep in mind what
their fight was about – an unjust education system that produces, reproduces, and buttresses socioeconomic and political inequalities. The dream of a truly empowering and transformative education,
for which the young students yielded their lives remains a mirage for most of our children today.

Across many poverty-stricken villages, the ASALs, and informal settlements in Kenya, millions of
children are excluded from school by socio-economic realities that supersede the rhetorically
progressive government policies. Children in the insecurity-prone parts of the country have to make
the painful choice between life out of school and the mortal risk of taking a bandit’s bullet on their
way to or from school. Young girls, who for no fault of their own, have been forced into premature
motherhood, abandoned by family and friends, and blamed by society for their own victimhood,
have to choose between returning to school to build their futures and the immediate survival of
their babies.

Many children are engaged in seemingly insurmountable daily struggles for survival, in pursuit of
education: some cross crocodile-infested rivers while others trudge long distances to and from
school, often on empty stomachs, to quench their thirst for knowledge. Yet society is ready to
stigmatize them if they return below-par examination scores. Many children have been conscripted
into criminal gangs and bandit armies, to kill and maim for the benefit of heartless gang masters.
Others have been turned into beggars for hire, enduring the searing vagaries of street life to collect
money for shadowy sleek operators.

Yet the children out of school are not the best poster boys and girls of how incomplete the fight for a
just education that began 46 years ago is. The real struggle is shouldered by children trapped in
schools that use them as hostages to fleece their already impoverished parents while contributing
nothing to improving their prospects in life. Many children are frequently sent home to bring school
fees, teachers’ motivation fees that are unreceipted and not paid to the school’s official bank
account, rims of foolscaps, etc. yet when in school, their teachers rarely attend lessons. And when
they do, they are often unprepared for their lessons.

But many teachers are frustrated. They are frustrated by overly corrupt and dictatorial school heads
who run the public institutions like their private enterprises and for private gain. Even more
frustrating is the fact that often, it is the heads who lead in non-attendance of lessons and blatant
display of impunity. Many owe their positions to nepotism and corruption, and thus consider
themselves untouchable. They treat parents and fellow teachers with the utmost contempt and brag
about bribing their superiors in the education management hierarchy to stay in their nefarious
business.

Teachers have immersed themselves in pursuit of academic papers, often at the expense of teaching
because to them, it is the only pathway outside of corruption and nepotism to career progression.
Consequently, it is not uncommon to find a school with a head of a department who holds a
master’s degree with consistently poor performance in his/her subject. A bigger problem, however,
is the school resourcing policies that favor big schools, generally captured by well-to-do parents, to
the detriment of the smaller schools educating a majority of children, most of whom are from poor households. This has seen a few schools being well-resourced and well-managed, while many others
are just a little better than growth centers.

As we commemorate the unfortunate events that underlie this day, there is an urgent need to
rededicate ourselves to the cause of delivering a just education for all the children in this country.
This means ensuring that all children attend school and benefit from quality education. In practical
terms, it calls for:
• A rethink of the school establishment, resourcing, staffing, and management policies and
practices.
• Transparency and accountability of all actors in the management of the education sector
and for all-inclusive partnerships that enable productive collaboration.
• Opening up schools to public scrutiny to avoid a situation where they become black holes in
which children endure untold suffering to the level of damaging their characters.
• Redoubling the political will to undertake the requisite reform of the school system to
eliminate intrinsic barriers to equity in education. 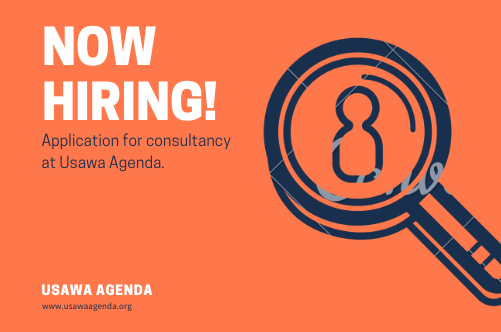 Usawa Agenda is Hiring! Usawa is looking for a top-level...

Calls for Applications - Editor and ProofReader

Usawa Agenda is Hiring! Usawa is looking for a consultant...